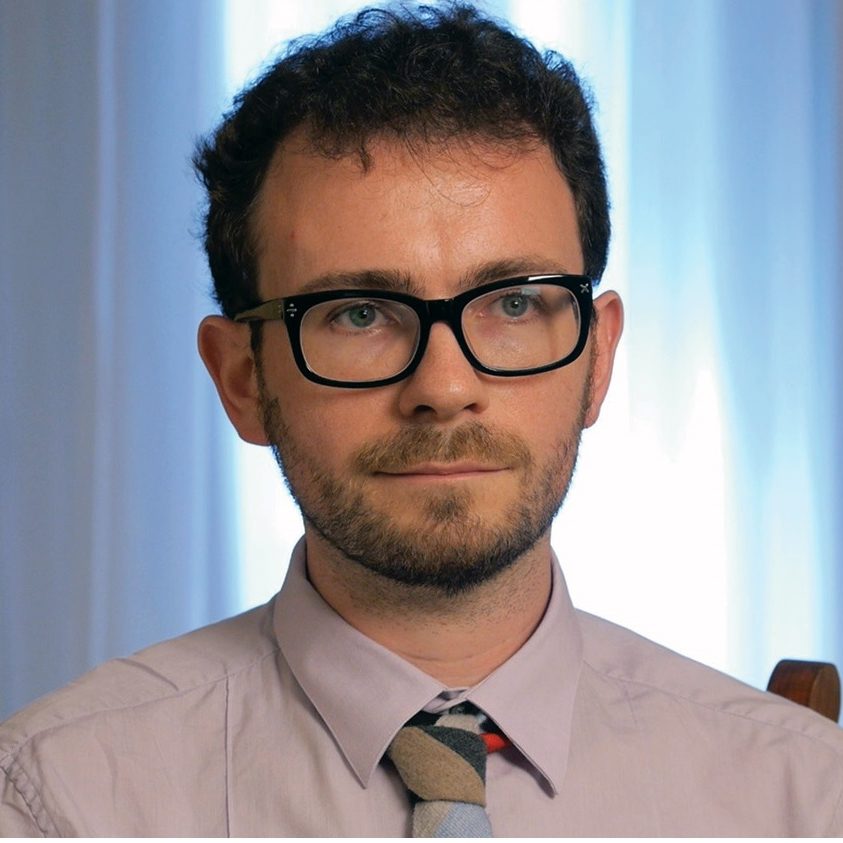 Paper 2: The Effects of Name Perception and Selection on Social Science Measurement of Racial Discrimination

Data Request – We Need Your Assistance

We are looking for correspondence audits that have used names to signal race (White and Black only, for now). To date, we have collected data on nearly four dozen studies (listed below), but we would like to add more. We have conducted extensive searches to locate research, but we need your help. Correspondence audits have become increasingly popular and many exist in working paper format or conference presentations only and are harder to track down. We are open to including more correspondence audits with the following conditions:

If your research (or other research you know of) fits with what we need, please contact us at mgaddis AT soc.ucla.edu and e.n.larsen AT sosgeo.uio.no. You can also send us a message with a link to a study on Twitter @smgaddis or @audit_studies.

The first working paper from this project will be posted to SSRN soon. Check out this link for updates. 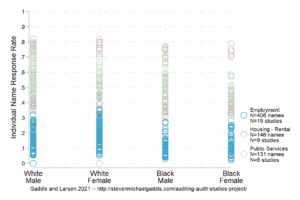 2004. Bertrand and Mullainathan. “Are Emily and Greg More Employable than Lakisha and Jamal?” American Economic Review.

2010. Friedman,  Squires, and Galvan. “Cybersegregation in Boston and Dallas: Is Neil a More Desirable Tenant than Tyrone or Jorge?” Working paper.

2011. Hanson and Hawley. “Do Landlords Discriminate in the Rental Housing Market? Evidence from an Internet Field Experiment in US Cities.” Journal of Urban Economics.

2014. Ewens, Tomlin, and Wang. “Statistical Discrimination or Prejudice? A Large Sample Field Experiment.” The Review of Economics and Statistics.

2014. Nunley, Pugh, Romero, and Seals. “Racial Discrimination in the Labor Market for Recent College Graduates: Evidence from a Field Experiment.” The B.E. Journal of Economic Analysis and Policy.

2015. Gaddis. “Discrimination in the Credential Society: An Audit Study of Race and College Selectivity in the Labor Market.” Social Forces.

2015. Gaddis and Ghoshal. “Arab American Housing Discrimination, Ethnic Competition, and the Contact Hypothesis.” The ANNALS of the American Academy of Political and Social Science.

2015. Sharma, Mitra, and Stano. “Insurance, Race/Ethnicity, and Sex in the Search for a New Physician.” Economics Letters.

2015. White, Nathan, and Faller. “What do I Need to Vote? Bureaucratic Discretion and Discrimination by Local Election Officials.” American Political Science Review.

2018. Agan and Starr. “Ban the Box, Criminal Records, and Racial Discrimination: A Field Experiment.” The Quarterly Journal of Economics.

2018. Gorsuch and Rho. “Customer Prejudice and Salience: The Effect of the 2016 Election on Employment Discrimination.” Working paper.

2019. Fang, Guess, and Humphreys “Can the Government Deter Discrimination? Evidence from a Randomized Intervention in New York City.” Journal of Politics.

2019. Giulietti, Tonin, and Vlassopoulos. “Racial Discrimination in Local Public Services: A Field Experiment in the United States” Journal of the European Economic Association.

2019. Kugelmass. “‘Just the Type with whom I Like to Work’: Two Correspondence Field Experiments in an Online Mental Health Care Market.” Society and Mental Health.

2020. Ameri, Roger, Schur, and Kruse. “No Room at the Inn? Disability Access in the New Sharing Economy.” Academy of Management Discoveries.

2020. Brown and Hilbig. “Locked Out of College: When Admissions Bureaucrats Do and Do Not Discriminate.” Working paper.

2020. Button and Waker. “Employment Discrimination against Indigenous Peoples in the United States: Evidence from a Field Experiment.” Labour Economics.

2020. Christensen, Sarmiento-Barbieri, and Timmins. “Housing Discrimination and the Toxics Exposure Gap in the United States: Evidence from the Rental Market.” The Review of Economics and Statistics.

2020. Gaddis and Ghoshal. “Searching for a Roommate: A Correspondence Audit Examining Racial/Ethnic and Immigrant Discrimination among Millennials.” Socius.

2020. Leasure and Kaminski. “The Impact of a Multiple Conviction Record on Hiring Outcomes.” Crime & Delinquency.

2020. Yemane. “Cumulative Disadvantage? The Role of Race Compared to Ethnicity, Religion, and Non-White Phenotype in Explaining Hiring Discrimination in the U.S. Labour Market.” Research in Social Stratification and Mobility.

Forthcoming. Phillips. “Do Low-Wage Employers Discriminate Against Applicants with Long Commutes? Evidence from a Correspondence Experiment.” Journal of Human Resources.

2009. Kleykamp. “A Great Place to Start? The Effect of Prior Military Service on Hiring.” Armed Forces & Society.

2007. Correll, Benard, Paik. “Getting a Job: Is There a Motherhood Penalty.” American Journal of Sociology.

2018. Mendez and Grose. “Doubling Down: Inequality in Responsiveness and the Policy Preferences of Elected Officials.” Legislative Studies Quarterly. (Note: only uses 1 White and 1 Latino name)

2020. Druckman and Shafranek. “The Intersection of Racial and Partisan Discrimination: Evidence from a Correspondence Study of Four-Year Colleges” The Journal of Politics. (Note: only uses 1 White and 1 Black name)

2020. Namingit, Blankenau, and Schwab. “Sick and tell: A field experiment analyzing the effects of an illness-related employment gap on the callback rate.” Journal of Economic Behavior & Organization. (Note: collinearity between names and treatment conditions)

2009. Berk. “Essays on Work and Education: Behind Bars and in the Free World.” Dissertation. (Note: ignored data request)

An early analysis of partial data looks like this: 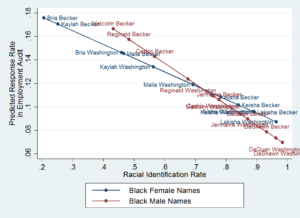